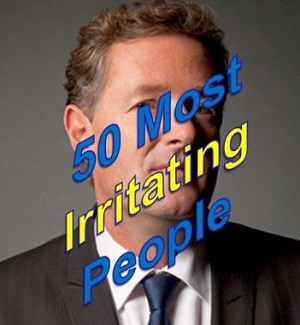 Down to 41 from 20. Only half as irritating as last year.

It’s the final knockings of 2014 and once again, it’s time to reveal the most irritating people of the past year.  The usual rules apply; we have excluded politicians, but can’t guarantee that a certain Mr Farage won’t make the list as we’re still not sure if he qualifies as a politician. Time will tell.

Today we start our countdown with numbers 50 to 41:

50     People who sign off emails with a single initial

49     People who send you Christmas cards, signed with the names of their pets

47     Colleagues who spend the whole day saying what they have achieved, what they are going to achieve and never spend any time actually achieving anything

44     People who can’t list things in the proper order

44     Shop assistants who insist on asking how my day has been. It would be better if you just got on with scanning the shopping instead of asking personal questions, thanks very much

43     Commentators who say a striker’s shot was ‘denied by the post’. Are they saying it would have gone in if the posts hadn’t been there? Gone in where? In the imaginary goal with no posts?

42     OAPs who insist on shopping at weekends when working people need to shop. Perhaps the doddery should be given single number PINs?

Comments Off on The 50 most irritating people of 2014: Part I