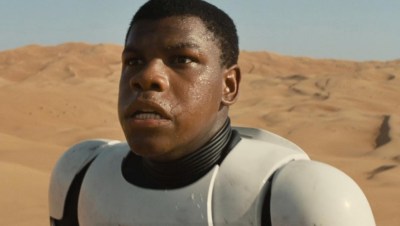 The Force is strong in this one or is it? We’ll find out in 383 days time

The trailer for the new Star Wars film, set like all the others in a sprawling universe populated by humans, aliens, droids and weird little bear things that are inexplicably ace at war, has confused bigoted nerds the world over by featuring actor John Boyega in a Stormtrooper costume.

“I’m so not racist,” said one of the first people in Harold to watch the trailer, 19 year old Melanie Delaney, “but like how can a black bloke be all heroic and that? Haven’t the Star Wars people listened to Do They Know It’s Christmas?”

On being told that John Boyega’s from Peckham she became confused saying “I thought the only English guy allowed to be in films now is Benedict Cumberbatch.”

Before anyone could say “but surely Order 66 explains non-clone Stormtroopers?” the internet exploded with so many racist comments it would take 12 parsecs to read them all.

A spokes-small-carnivorous-humanoid for Star Wars said that he believes all the negative responses to the new film’s trailer come from fear and that “Fear is the path to the dark side…fear leads to anger…anger leads to hate…hate leads to suffering.” He then slowly wandered off muttering something about “only a two hour toy advert anyway, it is.”