‘No regrets’ insists man who bought camel on Black Friday 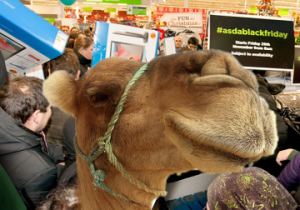 Hello, can I interest you in a bargain?

A man who got carried away in Black Friday’s shopping frenzy and ended up buying a camel has insisted he does not regret his unplanned purchase.

Project Manager Norman Mellor, from the village of Harold, set out for the midnight sales in nearby Dunstable intending to snag a 46″ Faptronic LCD TV with 3D and soundboard, but was disappointed to find out that everyone else had the same idea, and there were no televisions left.

“I admit to being a bit caught up in the moment,” conceded Mellor, “There were bargains everywhere and I was desperate to get a good deal. I toyed with a Dyson, but we’ve already got four and I couldn’t really justify it. Then I saw the camel.”

After some shameless elbowing and pushing in, Mellor managed to squeeze his way to the front of the enthusiastic camel queue, and was delighted to be able to walk away with a 900-kilo Arabian Dromedary.

“We didn’t have a camel,” he stated rather obviously, “And I thought it would look great on the patio. Also, Jayden needed a new water bottle for school, and I’m pretty sure none of the other kids have camels. The water goes in the hump, you know.”

Mellor was relieved to get his enviable purchase safely out of the store and into the Nissan.

“There was one hairy moment when a bunch of local lads who’d missed out on tellies grabbed hold of my trolley,” he explained, “But then they realised I had a camel.”

When pressed to explain whether the camel really represented a good deal, Mellor was unrepentant.

“I’m not even sure how much camels cost,” he insisted. “All I know is that I got one at half price. And that’s a bargain.”

It is possible that Mellor’s savings may be greatly reduced by significant knock-on expenses, however. He has discovered that camels cost approximately £1000 per day in feed and cleaning products, and he has already been evicted from his penthouse apartment “for obvious reasons”.

“Unfortunately my wife has left me as well,” admitted Mellor. “I was halfway through explaining that Bactrians are the ones with two humps, like the letter ‘B’, when I realised she’d run off with the postman.”

“I’ll certainly be queuing up earlier next year!”