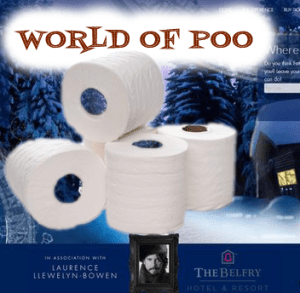 The smell of Christmas

A Christmas attraction designed by Laurence Llewelyn-Bowen has closed down after only ten minutes following a flood of complaints.

Visitors to The Magical World of Poo near the village of Harold said it was far from magical, with piles of excrement everywhere and Father Christmas handing out cheap shiny toilet paper “like they used to have at school”.

The few paying customers before the site’s hasty closure in a police raid said their children had been left in tears. One said it “ruined the magic of Christmas”.

“We were so excited about the World of Poo, the kids have been hopping up and down all week,” said an unhappy visitor.

“But we got here, and, well, not to put too fine a point on it, it was full of poo!” he complained. “I could have knocked that out in my back garden, if I wasn’t constipated.”

Designed by celebrity turd Laurence Llewelyn-Bowen, the attraction claimed to represent “All that is magical about the human digestive system”. The reality, witnesses reported, was more like a nightmare hell of unhappy children screaming at being sprayed with fecal matter.

Organisers admitted that the World of Poo had not turned out entirely as envisaged, but blamed a last-minute attack of gastroenteritis for making things fall apart. “We have to put our hands up, it’s sloppy,” confessed an organiser. “And now because a few kids get dipped in manure, it goes viral.”

“It’s not merry enough to be Christmassy, and not fun enough to be exciting,” explained the Evening Harold’s tourism correspondent Paul Veltman. “They’ve fallen between two stools. Mind you, so has everyone who’s been there.”