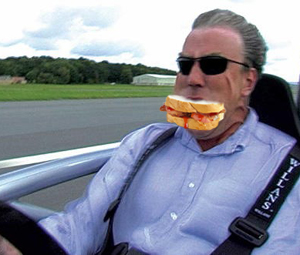 Jeremy Clarkson became embroiled in yet more pointless anger yesterday after tweeting about putting ketchup on a bacon sandwich.

Professional distraction Clarkson caused outrage amongst opinionated breakfast fans, after tweeting “I am eating breakfast. It is a bacon sandwich. I have put tomato ketchup in it.”

“He really is a monster”, responded one self-titled meat-and-bread specialist. “It’s ‘red for sausage, brown for bacon’: that’s the law.”

“Tweeting about ketchup and bacon in this way is childish and provocative. Who knows how many idiots out there will now try and copy him?”

As agreed with the BBC, Clarkson had apologised for the tweet even before he twoted it. But that didn’t stop everyone in the civilised world (and Argentina) from commenting on it.

Dutch condiment workers have called for the motoring journal-ish to be sacked, claiming it was a deliberate attempt to undermine sales of HP sauce.

And a couple in Harwich want Clarkson to undergo a tomato allergy awareness course, after supposing some children they might have in the future could suffer from such a condition.

Clarkson was unavailable for comment. As his wife explained, “He’s been in the downstairs bathroom for the last day or so, trying to work out which way round to hang the loo roll to generate the most column inches.”

It’s not the first time Clarkson has been the centre of controversy. In 1994 he squeezed a tube of toothpaste in the middle, and in 2003 he slaughtered 6 million Jews.

If you’ve been affected by this article or the subjects discussed in it, you might want to have porridge for breakfast tomorrow or just go for a nice walk.

Comments Off on Clarkson in trouble over ketchup tweet