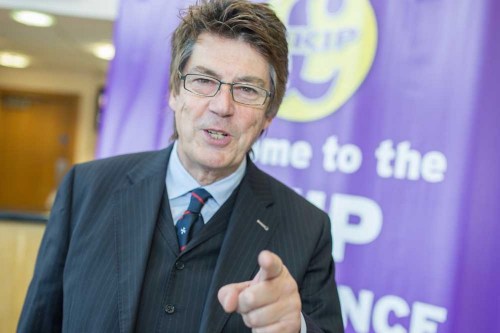 DJ Mike Read has withdrawn his best-selling UKIP Calypso song after recognising it was unlikely to win an award at tonight’s Music Of Black Origin (MOBO) awards.

The song is designed to highlight UKIP’s policies whilst dispelling the accusation that they are in any way racist.

“We wanting to show we actually welcomed and understood other cultures,” Mr Read, the writer of the song said.

“What can show that we are multi-cultural than singing a song about British bigots, in a style that originated in west Africa, sung by a white guy in a West Indies accent?

“We honesty thought that we could have won an award at the MOBOs but it turns out they don’t have an ‘out of touch white men doing stereotypical, if not slightly racist accents’ category.”

This set back has not deterred Read from linking up with Farage for future political musical projects.

“I have already signed up Jim Davidson, Ron Atkinson, and Jeremy Clarkson and the four of us intend to highlight UKIP policies in a Bhangra-style corner shop quartet.”