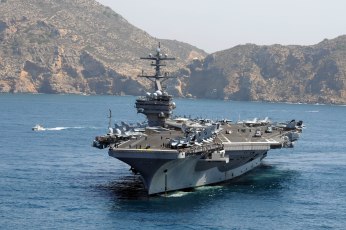 USS George H.W Bush. America has ten of these things. Bit greedy, no?

President Obama has denied ordering US Navy ships into the Persian Gulf for hostile reasons.

“Our ships, their thousands of armed personnel and countless drones and missiles, are not getting close to Iraq to start a conflict,” he told the American people in a televised address. “We are merely dolphin watching which is just lovely. Many other things are lovely including oil and massively lucrative reconstruction projects but they’re for another day. I pinky swear.”

“There will be no US invasion of Iraq,” the President stated. “Surely we did a good enough job the last time?”

Comments Off on Obama says US ships in Persian Gulf ‘not war starting, dolphin watching’