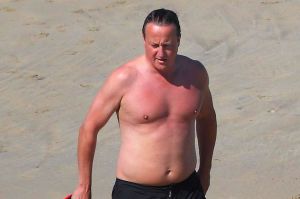 
Internet security experts say the fears are justified and naked Cameron pics made Trojan viruses seem benign, with MacAfee spokesman John Field saying, “One glimpse of Cameron in the flesh could have a life-long effect on a viewer’s ability to feel empathy, form relationships, and have a normal sex life. In other words, they could become a Tory.”

“No amount of anti-virus software will help people then – you can’t just reboot your memory.”

Harold pensioner Elsie Duggan said although she wasn’t entirely sure what the internet was, she knew what it was like to be f***ed by the Tories and so had no regrets about gouging her own eyes out. Even the risk of someone describing a naked Cameron meant she was considering cutting off her ears.

Perhaps the most extreme reaction was a woman who fled to internet-free North Korea to avoid the nude Cameron menace. The Evening Harold tried to interview her as she was boarding her plane but Samantha from Downing Street was too traumatised to comment.

Filed under Around Harold, Politics, Sex