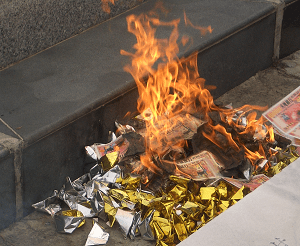 An advert for holiday sharks Centre Parcs has been banned, after claims that it showed a visitor who still had a penny to his name.

Amidst the normal crowd of gaunt faces and children dressed in rags was a man looking at a menu, and wondering whether to buy chips.

“The very idea that anyone can come away from Centre Parcs while still remaining solvent is a disgusting distortion of the truth”, said campaigner Pippa Delaney.

“We’d done most of our money before we’d left the car park and had to spend the remaining four days eating soil. We just sat in our chalet trying to remember how to play charades, and fantasising about cooking a swan over one of their £87 fire logs.”

PR Manager Mark Fleece defended his company. “Look, it’s clearly an exaggeration, we’re not seriously suggesting that Centre Parcs is in any way affordable, particularly if you come during the school holidays. But I’d like to assure our customers that all year round we will strive to bleed them dry, even in the weeks when their kids should be sitting their GCSEs.”

“Now, how about a game of laser archery?”, suggested Fleece. “Or you could hire a sandal, they’re only £135 an hour.”

“Shall I pop you down for a second mortgage, or will you be paying with one of your kidneys? It’s no coincidence that the pool is that shape.”