Now Osborne complains: “Evans asked for a Hand Out” 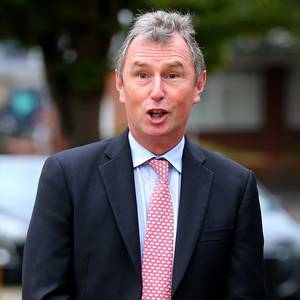 Nigel Evans will not re-apply for the Conservative whip until he knows if his recent defence costs will be met by the CPS, say friends.

“Obviously, as a Tory, I’d  be opposed to any increase in state funding, especially for defending alleged criminals” said the former Conservative MP.

“However, just as obviously, as a flesh and blood human being, I feel very hard-done-by and frankly, to quote my bank manager, ‘completely skint’”.

Colleagues point out that Evans has consistently worked to keep state expenditure down. “He’s voted in favour of reducing housing benefits for social tenants and never voted in favour of increasing the minimum wage or benefits in line with prices, or paying higher benefit rates to the chronically sick” said one, going on to argue that money not squandered on poor people more than covered the £130,000 defence costs of the £66,000 a year (+ allowances and expenses) MP.

“I am of course fully against ordinary people getting something for nothing from the state, like justice,” Mr Evans confirmed “but for those of us who have done the right thing, put, say £130,000 aside for a rainy day and then spent it on something, well, clearly that’s a completely different situation.” before sobbing “Oh, no, one hundred and … thirty … thousand … f***ing … pounds!”

Chancellor George Osborne and Justice Minister Chris Grayling will now carefully consider Evans’ plea for financial assistance, at the same time as pursuing a Tory goal of slashing the budget for Legal Aid, which was put in place to help poor people fight injustice.

“The way I see it,” said Mr Grayling “if a defendant’s costs have already been met out of his personal savings, then it doesn’t sound to me like he’s particularly poor, especially if he’s still of working age.” adding “This is exactly the sort of policy Mr Evans should be voting for, if he wants to regain the Tory whip in time for selection in the spring.”

Comments Off on Now Osborne complains: “Evans asked for a Hand Out”