A team of doctors in the USA who have successfully grown the first artificial vagina have been working so hard that none of them has left their laboratory for the last three months, it was revealed today. 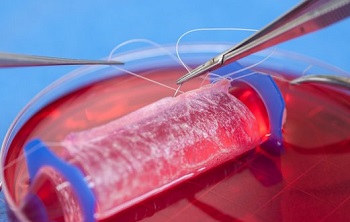 Doctors at Wake Forest Baptist Medical Centre in North Carolina used pioneering technology to build a biodegradable scaffold onto which human cells attached before being grown in a bioreactor, producing a perfect replica of the human vagina.

The pioneering team in charge of this exciting work finally emerged from their laboratory complex this morning, pale and haggard from lack of sleep, some bent double almost unable to walk, such has been their dedication to this important work.

Unusually for scientific research this was an all-male team, and their wives and girlfriends welcomed them joyfully, although the men seemed mostly too tired to fully appreciate the reception.

“It’s been such a grind, you wouldn’t believe what we’ve put ourselves through.”

“Artificial vaginas have always been something of a dead-end technology, but this new work has created an opening that the tech giants will be rushing to fill,” explained BBC Health reporter James Gallagher. “Samsung have already announced a vagina with a very similar look and feel but twice the size, but this may be too much of a stretch for today’s market, where deep pockets are a thing of the past.”

Researchers at the University of Basel in Switzerland have used similar techniques to reconstruct the noses of patients after serious injury, and are said to be “absolutely kicking themselves”. Prof Martin Birchall, who has also worked on lab-grown windpipes, commented: “Noses! Windpipes! What the bloody hell was I thinking? Bloody hell, bloody bloody hell!”

Meanwhile, a team at Cambridge University is reportedly close to constructing the world’s first artificial arsehole, which is apparently only months away from being ready to take over as Minister for Education.