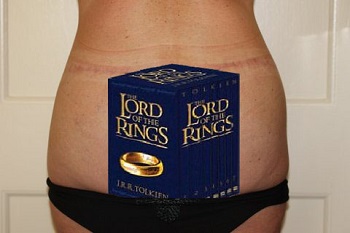 After complaints from the literary establishment against the new policy of banning prison inmates from receiving books, protests have now spread to relatives of the prisoners, who have found to their discomfort that all reading material must be smuggled inside by the usual channels, specifically the rectum.

“What with mobile phones, snout, drugs and a mobile lending library, my back passage is as well-stocked as your average Tesco Metro,” complained Linda Norris, wife of notorious ‘lifer’ and bookworm ‘Chopper’ Norris. “I rattle.”

“I’ll never forget the sad look on my wife’s face when I told her I wanted to read ‘Lord of the Rings’,” confessed another prisoner. “And I’d always fancied tackling Proust’s seven-volume “A la recherche du temps perdu”, but she insists I should wait for the movie.”

One of the slow readers on D Wing is blaming himself for his wife’s recent collapse. She was rushed to the infirmary when the ‘Giant Pop-Up Book of Dinosaurs’ she was smuggling unexpectedly exploded. A doctor explained: “We all know how hard these things can be to get to closed again. People don’t want to draw attention to contraband, but sometimes you’ve just got to hold your hands up.”

One unexpected outcome of the ban is the resurgence of Jeffrey Archer as a popular novelist. His winning combination of being both lightweight and greasy makes him reportedly a very easy read.

Also in a literary vein, Wormwood Scrubs’ prison magazine has been scathing in its write-up of the latest Dan Brown novel, criticising the “laboured plotting, weak characterisation and unfortunate streaks of excrement”.

Apparently this was one of the few books which did not have to be smuggled in.