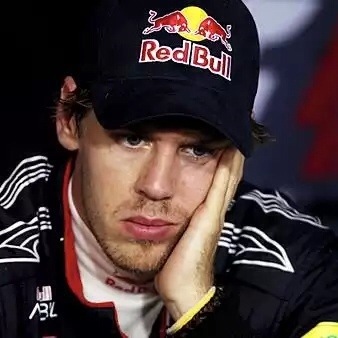 The FIA, Formula 1’s governing body, has taken a positive step to address concerns over the lack of noise from the formula’s new V6 engine. Today’s Malaysian Grand Prix saw Sebastian Vettel’s moaning recorded ready to played out of the cars at the next race.

The tractor-like noise that comes from the new engines is a lot less ‘thrilling’ than the previous power units according to critics who say F1 will suffer from the lack of a high-pitched, almost unbearable whining sound every time a car screeches past.

However many noticed that same high-pitched, almost unbearable whining sound was still emanating from one of the Red Bulls, but with a slight German accent.

“We were asked to investigate the sound as it was what those in charge wanted from every car,” team principal Christian Horner said.

“So our engineers worked through the night and discovered it went away when we took one vital component out of the car, Sebastian Vettel. The decision was made to record him throughout the whole of the Malaysian Grand Prix so the whining sound could be played out of the back of all cars from the next race.

“Luckily, because he didn’t win, he quality of the high-pitch noise coming from the cockpit mean anyone listening to it would be required to wear ear defenders.”

This is one of a few different options that was available to the sport to recreate the old engine sound, with the option of tapeing a Bernie Ecclestone to the back of every car one of the early front runners.

“Giving each team a Bernie Ecclestone to tie to the car was an early idea, but it was quickly scrapped,” race director Charlie Whiting explained.

“The trouble with a Bernie is that unlike Vettel, the whining sound is just too low and monotonous. In the old days, fans came to F1 to be deafened but wanted to get their hearing back. With the Ecclestone trumpets, permanent hearing damage comes as a blessed relief.

“We also had issues trying to test it as Bernie went AWOL during testing, possibly lost down the back of a sofa.”

Ecclestone, who is adverse to any change that isn’t replacing a 24-year-old blonde with a younger model, himself has been a critic of the new developments in the sport his money loves saying F1 should not only return to having louder engines again but also the authentic sound of exploding fuel tanks and burning flesh, “just like the good ol’ days”.

The new Vettel sounds will be played out of the cars from the next race, but the FIA have said if the sound still doesn’t please fans they have a back-up plan of adding a bit of Alonso.