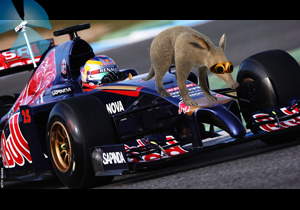 A new Formula 1 season starts this week end with massive (or should that be Massa?) changes to the cars’ specifications. Here is our print out and keep guide:

Noses: All of the cars are required to have a nose resembling an animal. Most teams have settled on styling their snouts on crocodiles, anteaters and tapirs. No one has elected to go for an elephant’s trunk. That would be silly.

Engines: The new F1 racers have to be fitted with the same engine as a motorized wheelchair. This is apparently to emulate the hybrid style of the next generation of road cars. Of course, the teams are allowed to fit modifications, but beyond fitting a wind turbine and painting them invalid blue, they are struggling to come up with fresh ideas.

Fuel: To fool everyone that F1 really cares, the cars are not allowed to carry more than a thimble full of fuel to last the whole race. On the plus side, races should be over in about 15 seconds, leaving TV viewers more time to ogle Suzi Perry.

Team Changes: Grand Prix drivers change teams more often than characters in a Swedish soap opera change sex. This year Massa is with Williams, the Hulk is with Sauber and that weird bloke with the scary eyes has moved to Lotus.

Noise: Although everyone complained about the gut wrenching roar of the old engines, they are furious that the cars now make no more than a rattily strimmer whine. Whilst this is disappointing, it does reflect the new reality economics because when a car goes off the track it will be able to cut the perimeter grass.

Bernie Ecclestone: The grand old man of motorsport has been fitted with ERS will be ready to go the moment he is taken out of the box.

Other Technology: There are lots of other fiddly bits, but no one needs to know about that. Even the teams are baffled by these. Ask anyone from Lotus.

Comments Off on Noise free hybrid anteaters? Our guide to the new F1 season