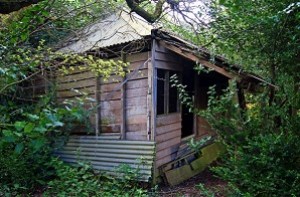 The National Trust has confirmed that it has reached its fundraising target to purchase a shed in want of “loving restoration” in the back garden of 33 Jubilee Rise, Harold.

In their press release, the National Trust describes the shed as:

“This magnificently modest horticultural facility, with parts dating back to the Texas Homecare period, was founded by Ronald Thompson in 1978. Internal enhancements were carried out by his successor, Neil Banks in 2003 who added the uniquely styled uneven shelving and richly faded chintz curtains heavily influenced by his wife Maureen in 2006.”

Special features highlighted by the newly published brochure include the spider colony, the lingering aroma of St. Bruno pipe tobacco and the unused Percy Thrower seed trays carefully preserved in a corner of the north wing under a pile of yellowed copies of the Daily Mirror.

Dame Fiona Reynolds, Director-General of the National Trust said last night, “We would like to thank all of our fundraisers who donated so generously to help us to reach the mammoth total required to purchase this stunning example,” she trilled, adding, “in a way, it is fitting that this gem, being located in the grounds of a former Local Authority dwelling, is being returned to the Nation.”

It was pointed out to Dame Fiona that the shed may have seen better days, but she insisted that its original features made the planned investment “entirely worthwhile”.

Curator of the property will be Maureen Banks, who will continue to live at No.33 with the downstairs converted to a gift shop and tea room offering a wide range of local food sourced from traditional outlets at the end of Jubilee Rise including KFC and Dave Zhou’s Korean Restaurant.

Mrs Banks admitted her surprise at the offer to purchase the shed for £2,000,000. “I only advertised it for firewood”, she admitted.