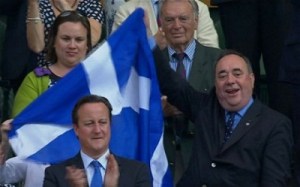 SNP leader and pro-independence campaigner Alex Salmond reacted furiously to suggestions from Tory, Labour, and Lib-Dem leaders that Scots will no longer be able to hate the English if the Scots vote ‘yes’ to independence. This is a crucial issue as the ‘currency of hate’ of the English is considered the glue that binds Scottish people together.

“It’s blatant scaremongering – they are bluffing” thundered Salmond. “Even though we will no longer be able to hate the English because we are ruled by the Tory b*stards, we can hate them for plenty of other reasons. We can hate them for their crooked bankers, aggressive warmongering, and David Bowie. We can hate them for warm beer, bowler hats, and Alistair Carmichael. And we can still hate David Cameron for his slimy false promises and huge shiny forehead.”

“You only have to look at countries like Ireland – they split from the English 50 years ago and still hate them with a passion. Hundreds of years of shared antipathy between the Scots and English isn’t going to be suddenly forgotten no matter what ‘Better Together’ campaigners claim.”

Salmond said post-independence, the Scots still had plenty of other options even if the English withheld the ‘hate’ option by being thoroughly pleasant.

“Look I don’t think for one minute the English can conduct themselves in a way that we wouldn’t hate them, but if by some miracle they do it’s not the end of the world. We could join the EU – there are plenty of countries we could hate there – the Germans with their occupying towels, the Spanish with their glorious weather, and the French for well, being French.”

Despite Salmond’s comments, it is clear that this issue is worrying many Scottish voters. Ability to keep hating the English is now rated higher than ability to keep the pound as a key referendum issue.

“Thon Ecky Salmond wis a’ fur tellin’ fowk that it wisnae aboot hatred o’ the Sassenachs, an’ that it wis aboot self-governance, but we a’ ken that’s pure pish. Havin’ the right tae hate the Sassenach English is means mair tae us than a’ the fresh, clean air that we breathe.” said Dundee woman Jackie Brand between puffs on her cigarette.

Filed under Around Harold, Politics