Foreign-born cleaner resigns after discovering employer is a Tory 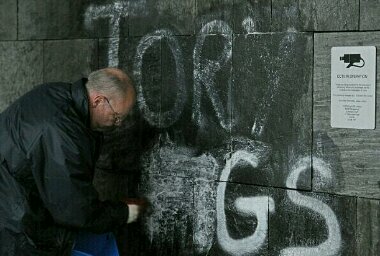 In hindsight, the daily cleaning of graffiti on the house should have been a clue

In the light of immigration minister Mark Harper resigning his position after it emerged he employed a cleaner who did not have permission to work in the UK, a separate incident has seen a foreign-born cleaner leaving their post after it emerged their employer was a Tory.

The cleaner has apologised for not carrying out reasonable checks on the person whose house they clean and said that although they had been a British citizen for the last 13 years, being from another country means they should have checked their employer was not, in fact, a Tory.

“I made every effort to ensure the person employing me had a degree of credibility,” the cleaner said in a statement. “However I accept I didn’t go far enough. I now realise that my suspicions should have been aroused when he told me my wages would be guaranteed by ‘mummy or daddy’ and paid for through the expenses system.

“I now realise that a quick check on Google would have highlighted he was a Tory MP, and as such would have ‘no leave to remain’ hypocritically employing someone they would rather was not in the country in the first place.

“I would like to apologise to my friends and family for the embarrassment this has caused them.”

Harold MP Spencer Chadwick, the Tory in question who stood at the last election on the mantra ‘British jobs for British people, unless the foreign ones are cheaper’, has said he accepts the cleaner’s resignation.

He also admitted his part in the mix-up saying: “I should have noticed that my cleaner, although working legally, was one of those foreign types. I just thought with that accent they were from the north somewhere, maybe Watford.”