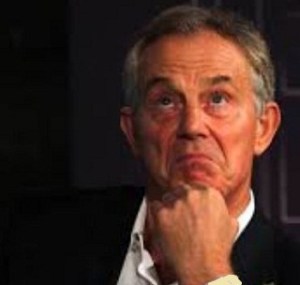 The fist of history biffs Blair in the face

It seemed impossible but after only seven days of intensive talks at UN Geneva Headquarters there was unilateral agreement after both sides agreed that UN peace envoy, Tony Blair, should keep his nose out of the peace talks.

Waiting press were first alerted to the possibility of a surprise announcement when a UN aide hurried out the building, returning a few minutes later clutching a glasses and a magnum of champagne. This was enough to baffle seasoned observers, but when news leaked out that Tony Blair may have been at the centre of things, there was widespread disbelief that his involvement could have had such a positive effect.

“Usually when there is an entrenchment of positions during talks, the facilitator tries to find some common ground, however trivial. But I couldn’t get the sides to agree to the most basic of issues. In fact the first three days was limited to a heated debate over the colour of the toilet paper in the bathrooms, and the next two over the brand of coffee being served.”

“Eventually during a long stand-off over the merits of custard creams over garibaldi biscuits, I suggested we should bring in a more experienced mediator, such as Tony Blair, as I was obviously getting nowhere.”

“The very mention of his name seemed to have a magical effect with both sides passionately agreeing that Mr Blair could, in the words of Syrian presidential adviser, Bouthaina Shaaban, ‘Sod off and die’. For the first time this week we had a mutual understanding and consensus. Ever since then we have made real progress, with the first example being the release of civilians from the city of Homs.”

Meanwhile, a smug Tony Blair, told reporters “I’m delighted to have had some influence in bringing both sides together. As you all know, I’m not one for sound bites but I can truly say that I felt the hand of history shove me in the face.”