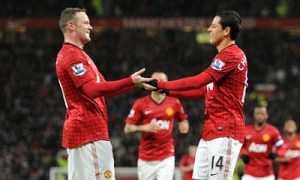 Manchester United ex-manager elect David Moyes says that Man United’s slump is nothing to do with him, but is almost certainly God’s retribution for either the legalisation of gay marriage, giving women the vote, or possibly Wayne Rooney’s haircut.

Moyes pointed to God’s reputation for ‘working in mysterious ways’, and said that God needed to find other ways of show His displeasure given that the traditional ‘lots of rain and floods’ is now just considered normal weather in the UK.

“I think God is making a stand against gay marriage by showing that even the world’s greatest football team can be cut down to mid-table mediocrity if that is what He wishes” observed Moyes. “You just have to marvel at the power of the Almighty when you consider how many goals He manages to get through my world-class defensive set up.”

Moyes speculated that God’s fury could have been exacerbated by the realisation that gay marriage was popular with women voters, and He was voicing His belated displeasure that women were given the vote in the first place. Wayne Rooney’s new haircut was most probably the final straw.

“The whole situation is really disappointing, but what can you do when you are up against a Guy who can part the Red Sea and stuff?” said Moyes.

“What? You say I could strengthen the squad, play players in position, and show some tactical nous?”

“Now you are expecting miracles.”