USA demands to know: ‘Who the hell got Iraq into this mess?’ 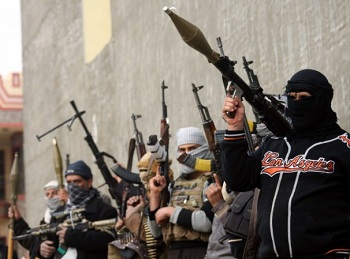 Tony Blair (right, in balaclava) spoke of the horrors of war

After reluctantly agreeing to the Iraqi government’s desperate plea for weapons to fight insurgents who are taking over the country, the United States has angrily demanded to know how the hell the country got into such a shitty state to begin with.

American surveillance drones and Hellfire missiles will shortly  be delivered  to help with the attack on the city of Fallujah, which has fallen to Islamic militants, but US Secretary of State John Kerry insisted this morning that the USA will not continue indefinitely  to clean up “other people’s messes”.

“Look at the place, it’s a disaster,” he complained at the White House this morning. “We know that the USA is seen worldwide as the noble global policeman, but we really can’t be expected to step in every time a country gets itself into this sort of chaos.”

US vice-president Joe Biden was equally scathing in his assessment. “It’s anarchy, plain and simple. The army’s knackered, religious groups are running around as if they’ve just been freed from some great Satan, and the government’s like someone’s just made it up. Madness.”

Members of the previous Republican administration were quick to criticise the White House’s response to the Iraq crisis. Former Secretary of Defense Donald Rumsfeld spoke movingly of his horror that the Iraqi people were being subjected to daily violence. Talking to journalists outside his own self-funded home for orphans, Rumsfeld was visibly shaken as he recounted the horror of “a noble country ripped apart by wicked men”.

One undeniably unbiased expert on the situation is Middle East peace envoy Tony Blair, who wept bitter tears for the press today, speaking of “How tragic it is to see what has happened to this once proud and oil-rich nation. Whoever is responsible really needs to take a good look at themselves. My God, this could even end in war!”

Comments Off on USA demands to know: ‘Who the hell got Iraq into this mess?’