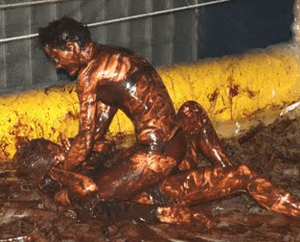 A ‘sale frenzy’ in a local chocolatiers that led to 14 arrests has been attributed to an undiagnosed diabetic.

‘Brown Dollops’ of Harold, purveyors of novelty chocolate excretions, opened their doors to a rowdy crowd of shoppers at 9am this morning only to have to close them again at 9.22.

“It was bedlam”, said shop assistant Diane Orrocks. “There were at least 7 customers jostling to be served first. That’s as many punters as there are days in a week”, lending proof to manager Brian Oswald’s claim that Orrocks is a keen amateur mathematician.

With an advertised 17% reduction on the price of a tray of praline coprolites, Orrocks’ statistical model had predicted at least a 7 in 12 chance of chaos. But no-one was prepared for the scale of the carnage that ensued, other than an off-duty St. John’s Ambulance cadet.

“I was stacking a display of truffle ambergris when I was knocked on my arse by an oaf”, said Orrocks. “I got back on my feet and suggested something along the lines of  ‘massive twat’. But the guy wasn’t listening, he was all glazy and panicked.”

Spotting the commotion, other shoppers lunged straight in, desperate not to miss out on a bargain.

“One of the big ones exploded and there was all organic brown gloop everywhere, people were sliding a bit and I saw a young girl say ‘woops'”, Orrocks revealed. Then the bloke that started it sat down and started scooping it gob-ways. It was sickening, but then he seemed to perk up.”

Fortunately, a junior member of St John’s spotted what was happening and immediately leapt into action. “I stripped a Toblerone and used the foil on the inside to fashion a medical alert bracelet”, said Tony Simms. “Then I popped it on his wrist, and asked my group leader for a badge.”

Unfortunately, the quick-thinking actions of Simms came too late to save the structural integrity of the building. “By then, the baying mob had destroyed most of our stock, and one had gnawed their way through a supporting roof beam”, said store manager Oswald.

“It’s the sort of thing that mathematical models can’t predict accurately”, claimed Orrocks. “Excel doesn’t have a function that allows for a village full of idiots.”

Comments Off on ‘Sale frenzy’ in chocolatiers was actually hypoglycaemic attack

Filed under Around Harold, Business, Health