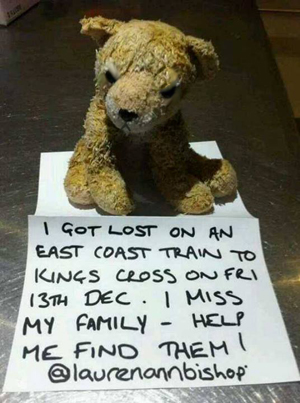 Polce have warned the public not to approach the bear, which is believed to be manky.

Police are urging Twitter users to to ignore a picture of a ‘lost’ bear, claiming that the evil animal is plotting revenge on its previous owners.

Known only as ‘Bear X’, the synthetic creature kidnapped a woman with quite tidy writing, and forced her to produce a letter to help him track the terrified family down.

Speaking from Dunstable hospital where she is being treated for shock, the woman assured a press conference that the bear was ‘absolute scum’.

“He was sitting alone on a train to Kings Cross”, said the woman who can’t be named. “I knew he was a wrongun’ because he had his little feet on the table. He had a tiny blue duffle coat on the seat next to him and growled when anyone asked if the seat was taken. And he kept humming, even though we were in a quiet carriage.”

The bear struck up conversation with the woman and claimed to be ‘Paddington’, before forcing her to eat a marmalade sandwich using his sad eyes.

“I knew straight away that something was wrong, I think the sandwich was drugged. I woke up in the toilets with this furry bastard standing over me, holding some paper and a pen.”

After the malevolent creature coerced her into writing the letter and posting it on Twitter, the woman managed to escape and alert the transport police. “I saw my chance when he was distracted, and that’s when I popped him in the sink. Then I had a quick wee, checked my make-up in the mirror and went back to my seat.”

Police are providing a round-the-clock watch for the family that used to endure the bear,  tazering anything small, furry and angry that happens to wander up their path.

“The family thought they’d seen the last of this little sod when they gave him the slip on the 14.20”, said PC Flegg. “He was a master of emotional manipulation, as well as the source of a strong smell of tramp burps.”

“If you happen to see a lost bear on a train, perhaps using Google Maps on his little phone, I would urge the public to avoid eye contact. And then just chuck him out the window.”

Filed under Around Harold, Lost and Found, News