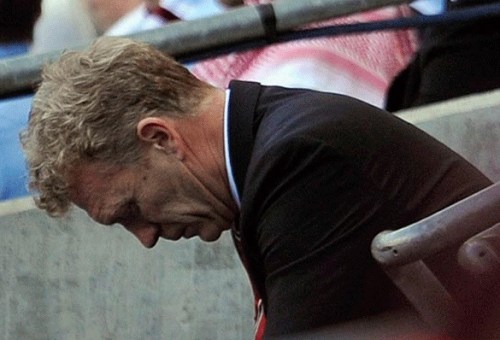 After a week he would rather forget, Manchester United boss, David Moyes, will be feeling more pressure this morning following rumours the club’s glory supporters have put in a transfer request.

The fans, many of whom joined the club after the treble winning season in 1999 seem to have taken the same route as striker Robin Van Persie and are looking for a move away from Old Trafford at the first sign of mediocrity.

“I’ve supported the team for every single year of my life, since ’99, and have been to Old Trafford on at least three separate occasions” glory supporter, Bill Treadwell told us.

“If I had wanted to support a team that loses two home games in a row and is outside of the top four, then I wouldn’t have moved from Liverpool. I agree with the pundits, things haven’t been the same since we lost Sralex, whatever that was.

“So I have been doing a bit of research and talking to my agent and drinking buddy, Gooner Gary, and will make the move to top-of-the-league Arsenal in January. I nearly joined them when they had their ‘invincible year’ so it would be a natural choice.”

Like many other of Manchester United’s glory supporters, Bill also sees this as an opportunity to save a bit of money. Although the average ticket price is more expensive at the Emirates, the stadium being round the corner from where he lives will save him a fortune in train fare.

The sudden drop of match-day commuters from south to north will force the government to rethink the viability of the London to Manchester HS2.

The transfer request from United’s glory supporters is another blow to David Moyes who successfully made the move from Everton to United in the summer whilst regaining his mid-table position in the league.

Speaking in front of the Sir Alex Ferguson stand, Moyes said: “I know it’s tough for them, but I promise one day, because of the job I will do at this club there will be a stand named after me.

“And the fans will get to see it every time we play at Manchester City.”