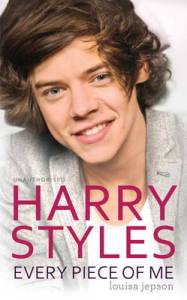 One Direction singer, Harry Styles, has today released his 23rd autobiography since finding fame on the X Factor five years ago. “What I’ve done since last Thursday” promises to be the most revealing book since his last one, which was released two weeks earlier.

“This is me, by me, in my own words. Well, somebody else’s words, I didn’t actually do the writing. But I told him stuff and I fully endorse it and will be getting most of the money from it.” confirmed Styles, “This book lets people have a real insight into my world over the last week, and reveals things like why I chose what I did for dinner on Friday.”

Most 21-year-old boys would struggle to find enough material to fill one autobiography, let alone twenty three, and Styles is no exception. This has not stopped him from trying though.

The new book, being serialised in Hello or Ok or one of those type of things, will reveal the “sensational” story of what time Harry got out of bed on Thursday, lift the lid on the “shocking truth” behind why he missed breakfast on Sunday, and share the “unbelievable” contents of his sandwiches at lunch on Tuesday.

“People have never had such intimate access to what goes on in my life, apart from in the previous twenty two books.” said Styles, “But this is different, because this is new. The previous books never revealed what I’d done this week but this one does.”

“Admittedly that’s only because this week hadn’t happened when I released the previous book. Anyway, buy it please. It would make a great Christmas present for a teenage girl with a limited IQ.”