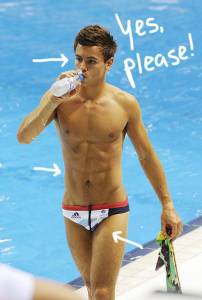 Tom Daley’s announcement that ‘right now I’m dating a guy’ while also clarifying ‘I still fancy girls’ has ensured that every UK teenager now has a Tom Daley poster on their bedroom wall.

“I’ve loved Tom since he was in short trousers, well he’s still in short trousers” said Melanie Delaney, aged 19 from Harold. “I’m just so relieved that Tom is only dating that guy ‘right now’. As soon as Tom gives him the flick, I’ve got a really good chance as he’s made it clear he ‘still fancies girls’.”

Melanie’s brother, Simon Delaney aged 16, was full of excitement as he stuck his first Tom Daley poster to his wall. “I’ve always known I was gay and I can’t wait to meet Tom as soon as he finishes with the guy he is with ‘right now’.”

Both teenage lesbians and teenage heterosexual boys also clamoured to join the Tom Daley fan club after taking the reference to dating a guy ‘right now’ while still ‘fancying girls’ as implying he was in some sort of transitional phase before having gender reassignment surgery.

A number of parents of teenagers have also bought Tom Daley posters for their bedrooms. Melanie and Simon’s mother, Pippa Delaney, said she had always dreamed of being a cougar and Tom was the perfect bait. Pippa’s husband, Dominic, thought, on balance, Tom seemed a better option than his wife. Even the Delaney grandparents thought Tom was a ‘nice young man’.

Spokespersons for both the gay community, the heterosexual community, and almost every other community lauded Daley’s brave announcement saying that Tom was the perfect role model for young people (and old people) everywhere.

With every boy and girl, and most adults, now in love with Tom Daley, attention has turned to the guy Tom is with ‘right now’.

“I hope that guy develops big spots on his bottom” said everyone.

Filed under Around Harold, Lifestyle, Sport