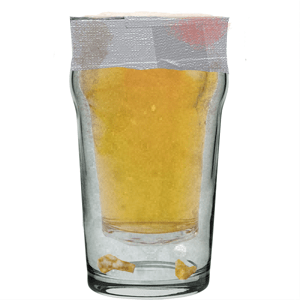 Landlord insists ‘ecopint’ is at least as efficient as windfarms.

A local pub landlord has been accused of misusing a green energy grant, after spending the entire budget on double-glazed pint glasses.

Eddie the barman at the Squirrel Lickers Arms has been charged with ‘greenwash’ by a group of thirsty environmentalists. The same group has also raised doubts over the accuracy of the energy labels adorning his beer pumps, and criticised a ‘green levy’ on so-called ‘hippy sh*t’ on the jukebox.

Regulars have complained bitterly about the new serving vessels, which they claim have a slightly lower capacity. Some are blaming interference from the EC, a misunderstanding not discouraged by Eddie.

“These are definitely your new carbon-neutral euro-compliant eco vessels, although I admit, they do look a bit like half-pint glasses crudely sellotaped inside pint jugs”, said Eddie. “They might be ugly, cumbersome and deceptively low in capacity, but that air gap is saving the planet.”

Eddie explained how the devices worked. “Using one of these technical wonders can preserve a pint of mild at room temperature almost indefinitely”, he enthused. “As a result, I’ve awarded the mild with a green ‘A+’ energy rating. There’s obviously a price to pay for being at the cutting edge of green technologies, and unfortunately you don’t quite get a full pint any more. But if anyone complains I tell them that it’s down to the French, and their insistence on drinking in litres.”

Although few have questioned the insulating properties of the new glasses, some have wondered if there should be fingerprints, bits of crisps and the odd hair trapped inside the boundary layer.

“The working conditions in the factory that makes these are frankly abysmal”, revealed the barman. “You’re asking a lot if you expect them to be spotless. There’s no heating, no running water and the hours are punishing. Children as young as nine are toiling away making these devices to preserve our future. I’ll show you later, if I can find the key to my shed.”

Comments Off on ‘Greenwash’ claims over double-glazed pint glasses

Filed under Around Harold, environment, Technology