Man Utd swastika error: “we mixed up dictators – was meant to be Sir Alex” 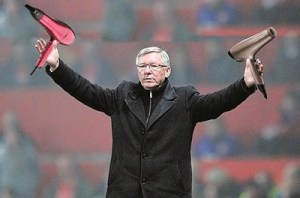 Who needs a V2 rocket when you have a hairdryer?

Red-faced Man Utd Head of Media David Sternberg unreservedly apologised for the Nazi style content in the Club newsletter, and explained that the swastika-like logo and reference to a “New Order” was because the newsletter editor misunderstand the instruction to profile “that terrible dictator”.

“Obviously we meant Sir Alex and not Adolf Hitler. Don’t get me wrong, Hitler was bad, but I’m not sure even he could have brought Roy Keane to tears, or thrown a boot at such a big star as David Beckham” said Sternberg.

“And Sir Alex got results – he might have been a dictator but 13 Premier League titles and conquering Europe twice speak for themselves. Hitler’s record was way inferior – just some minor titles in places like Poland and Hungary and a walk-over in France.”

Sternberg said the Nazi error was doubly galling given Hitler’s evident unsuitability to the modern game.

“Hitler was a bit racist, arguably even more so than John Terry, and this would have caused real problems given the ‘kick racism out of football’ push. You could never accuse Sir Alex of being racist – he hated everyone equally.”

Sternberg said next week’s newsletter would be very safe, and would profile a leader who carefully avoided making hard choices and just bumbled on hoping things would get better.

One Response to Man Utd swastika error: “we mixed up dictators – was meant to be Sir Alex”