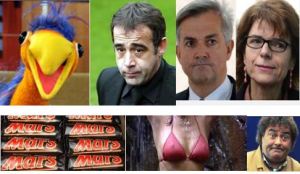 Leaked information from ITV HQ had revealed the list of Wannabes and Has-beens competing for the title of “I’m Celebrity Get Me Out Of Here 2013”.

It promises to be a fiery fortnight with a number of the celebs having publically fallen out big time in recent months. In addition all the old favourite ingredients are included with bikini totty, beefcake and the usual veteran DJ, just about the only one who isn’t awaiting trial somewhere.

No expense has been spared in ensuring that the jungle contains the names you want to see – as well as several you’ve never heard of.

Michael Le Vell: Coronation Street’s Kevin Webster, recently returned from a tricky tyre change on the M6 which has taken several months to sort. The actor himself has recently been cleared of sex charges and is looking to re-boot his career as a mechanic ..er .. actor.

Miss X: The girl who accused Michael Le Vell in court. She wishes to clear her name too. ITV say this should give viewers the opportunity to glean the truth from this sad affair.  She will wear a mask for the first week of the show and remove it at a moment when programme directors feel Le Vell is weak and vulnerable – probably when he’s not had a drink for ten days. They are already calling it the “unVelling moment”.

David “Kid” Jensen: 70’s Radio One DJ. Squeaky clean so far as we know; but we’re worried how he got that “Kid” nickname.

Bikini Babe: We’ve forgotten her name already, and so will you –  long before memories of that bikini body fade.

Handsome Bloke: Probably the fit guy from TOWIE or Made in Chelsea.

Eddie Large: Cheerful chubby comedian. With his partner Syd Little, used to be a stable of Saturday evening TV. But, so was Noel Edmonds.

Emu: Split from comedy partner Rod Hull some years back. Will he have the neck to make a comeback?

Comments Off on Spoiler Alert! I’m a Celeb 2013 – The Full Jungle List