Entire village adopts niqab and declares it to be lovely 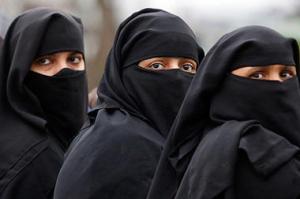 Teenage lads lurking on the recreation ground: much less scary than when in hoodies and baseball caps.

Under ancient village law a proposal to ban wearing the niqab within the boundaries of Harold resulted in everyone wearing one.

“A couple recently moved to the village and in a first for this community she wears the niqab,” explained Councillor Nina O’Neill. “Unfortunately someone made a complaint to the council so we invoked Suck it and See a fourteenth century bylaw that states that for a week villagers have to engage in the activity being complained about in order to create an informed opinion.”

“I loved my niqab,” mechanic Sean Pavey told us. “It’s so comfortable and I totally let myself go. Didn’t shave and I went naked under it. The gentle breeze I got around my jumble-giblets was fierce refreshing.”

Aspiring WAG nineteen year old Melanie Delaney said she felt liberated by covering up. “It was great to have people talking to me for once and not just staring at my tits.” Melanie who is 5’10 and weighs eight and half stone also said that she liked not feeling fat. “I’m such a blimp compared to the models in all the magazines I read. Being a niqabi sort of made me feel better about being so hideous.”

The woman whose wearing of the niqab ultimately caused everyone to do the same says that she is amazed and humbled by her new neighbours’ attitude.

“I’m the only woman who wears the niqab in Harold,” said Meya Begum. “I did get stares and comments. People said I was oppressed but it’s my choice. For me it’s an act of modesty that’s pleasing to my Creator, it’s a spiritual thing. It certainly wasn’t forced on me by my husband: he can’t even force the cat to stop jumping on the kitchen table.”

“It’s been very strange seeing a whole village of niqabis, especially male ones. I explained that the niqab is for women only but apparently the Suck it and See law means everyone has to be involved. I’m told that caused some real weirdness when they used it to settle the breastfeeding in public debate.”

When the week was over Mayor Rufus D. Jackson gave the official verdict:

“It is the finding of the village that niqabs are lovely and we say good luck to Mrs Begum and anyone else who wants to wear one. We will not be passing laws that force people to dress in certain ways or not dress in others. And anyone who doesn’t like it can bugger off to France.”

While most villagers have now reverted to their usual manners of dress some are reluctant to give up their niqabs.

“I’m keeping mine,” said satisfied niqabi, Alex Gates. “There are times when a man wants his face hidden. Now I can go out and by a copy of the Daily Express without embarrassment.”

Filed under Around Harold, Religion