Disappointment as US gunman turns out not to be Muslim 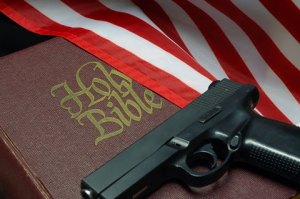 Praise the Lord and pass the ammunition.

There was disappointment amongst some Americans when it turned out that perpetrator of the latest mass-shooting in the US was in fact not a Muslim.

“I heard on the news that someone was firing shots in the Washington Navy Yard and instantly thought it was one of them Muslimists from the desert come to destroy the American way of life,” said Johnny T. Hapgood, who has lived all his life in Tennessee. “Then it turns out he was an American patriot who served in the US Navy Reserve and helped in the rescue efforts in New York on 9/11. It just don’t make no sense.”

“Aaron Alexis was an extremely unwell man suffering from a severe mental illness who acted alone,” said psychiatric opinion for hire Dr Tina Martinez. “Where’s the fun in that? There are literally millions of God-fearing American patriots who are feeling let down right now because this tragedy has failed to confirm their prejudices and support their world view.”

A source at the US State Department spoke of the Obama administration’s frustration that Aaron Alexis’ actions haven’t kicked off an international chain events in which the US are the Thundercats and anyone who doesn’t eat pork and recites the takbir is Mumm-ra.

“To be honest for a second there we all thought it was game on. Just as we were getting over the disappointment of not being allowed to bomb the shit out of Syria it seemed some Islamic extremists had come over from somewhere and handed us the perfect excuse to do it any way. Or invade Iran or blow up whoever we want to bring peace to the Middle East.”

“Now it’s back to ‘our thoughts and prayers’ and ‘unspeakable tragedy’ just like always. It gets old. Hopefully we’ll kidnap Edward Snowden soon and the President’ll have someone he can personally take his anger out on. Unless you want to send us over Julian Assange already.”