UK tells Australia to hop it over kangaroo painting: we’ll tie it down if we have to, sports 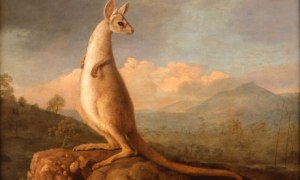 The Kongouro from New Holland by George Stubbs: obviously painted before roos evolved pockets. Wonder where it kept its change?

Two galleries separated by half the planet have launched appeals to raise funds to become the permanent owners of a George Stubbs painting of a kangaroo. The National Gallery of Australia launched their appeal citing that the work is much cherished in Australia as the first painting of a kangaroo by a Western artist and has featured on coins and engravings as a well known and important work of art.

The National Maritime Museum in Greenwich currently has the painting which is about as famous in the UK as a slightly popular teacher in a small village school and wants to keep it. An attitude summed up by Lemuel Auster an expert in wildlife paintings at the museum:

“This is Great Britain: we see, we take, we keep. Australia can jog on.”

The painting is one of a pair of Stubbs originals that both the UK and Australia want to own with the other being a portrait of an extremely depressed dingo.

“Most Brits wouldn’t recognise a dingo if they found one sat in their house checking its emails,” said Natalie Mitchell a curator at the National Gallery of Australia. “These painting have far more cultural significance to Australia.”

“They’re ours,” countered Auster. “Stubbs was British, the paintings have never left Britain and besides which Australia is very, very far away. You want ’em come and get ’em. We’ll be waiting.”

“I’ve got two words for Australia – Phar Lap – keep sounding off and another of your icons’ll have a little ‘accident’. I wonder how much arsenic it takes to down a Wiggle?”

Those seeking a peaceful solution to the stand-off have suggested that Australia could give the UK something it really wants in return for the paintings. A plan which floundered as no one could think of anything seeing as The Ashes have already been won.

Comments Off on UK tells Australia to hop it over kangaroo painting: we’ll tie it down if we have to, sports