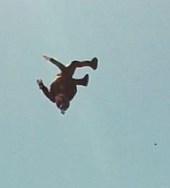 A Health and Safety expert has issued a warning following the death of local stuntman, Dave Dunnit, who jumped from a helicopter without a parachute yesterday.

“Although investigations have yet to be concluded, it would appear that the cause of death was most probably jumping out of the aircraft without a parachute,” commented the HSE man. “Unless the aircraft in which you are travelling is actually about to crash, we would strongly recommend against jumping out; especially without a parachute since the belief that you can glide to earth like a bird, is at best misguided.”

A spokesman issued a further warning to anyone else who may be considering this extreme sport.

“You should not try this at home. Especially as flying a helicopter in your home presents all sorts of practical difficulties such as getting it in the front door and the provision of appropriate ventilation for the fumes. And, of course, noise nuisance to neighbours.”

Mr Dunnit, had connections with Harold because his Uncle Eddie is the landlord of The Squirrel Licker’s Arms. Dave became well known in the village last summer when, dressed as Margaret Thatcher, he parachuted onto the village green, having drifted miles from his intended target of the Olympic Stadium.

A distraught Uncle Eddie was found last night consoling his loss over a pint. “He was a really nice bloke who often dropped in to see us,” he said. “I’m really going to miss him. Not as much as he missed the Stadium last year, obviously, but quite a lot.”