New mammal found: future buggered by its being impossibly cute 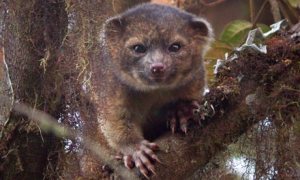 Olinguito: the most famous Ecuadorian after Julian Assange

Scientists who discovered a new mammal – Olinguito – in the cloud forests of Ecuador have given it the technical classification of doomed on account of its being impossibly cute.

“When we saw our first live Olinguito I looked into its adorable wide-eyes and thought ‘well, it’s buggered’ “ said zoologist Kristofer Helgen. “And that was before we watched it scampering all lovely from tree-to-tree and doing sweet little human things with its paws.”

Though thousands of new plant and animal species are discovered each year most are either microbes, insects or fungi and as such are greeted by the rest of the world with a resounding ‘meh’. However Olinguito has dominated the headlines on account of it being a gorgeous mix of teddy bear and domestic cat and easily visualised wearing a waistcoat and acting sassy in a Pixar film.

“We are worried that Olinguito’s looks will be its undoing,” said Helgen. “It has long luxuriant fur that’s an amazingly vibrant brown/orange colour. Apparently Karl Largerfeld has already tried to buy one hundred and one of them.”

Rumours that the tiny two pound mammal who is strictly nocturnal and mostly eats fruit also, according to Chinese medicine, has a vital ingredient in its liver for making an erection pill and furthermore tastes absolutely delicious and not unlike chicken are sadly expected to be confirmed very soon.

Comments Off on New mammal found: future buggered by its being impossibly cute