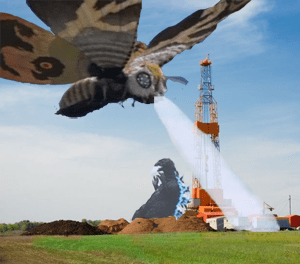 A sharp increase in the number of attacks by an angry, giant moth is being blamed on fracking by locals.

‘Mothra’, a devine kaiju or ‘strange creature’ that normally protects mankind from monsters such as the tyranosaur-like Cuadrilla, was discovered under a field outside Harold last Thursday. Wrenched from the ground in larvae form during a tentative light frack, Mothra was discarded by Cuadrilla after she proved too hard to set fire to.

“My theory is that this creature had been resting just below my potatoes”, explained farmer Evans. “She was probably all content and that, because the bees have come back. But when Cuadrilla drilled through her hidey-hole, she really got the hump. That’s when she went off on one and started beaming stuff with her face.”

Residents weren’t sure how to react to Mothra at first, partly because it wasn’t completely clear whether Cuadrilla was a ‘goody’ or a ‘baddy’.

“It’s true the bugger has rode roughshod all over our countryside, despoiling pastures and endangering our water supply”, mused Evans. “But on the plus side, he might give us some money.”

Mothra so far has offered no similar financial incentives, but she has flapped her wings a lot to distract Cuadrilla’s minions.

“If you live in this green and pleasant land but still want to plug your fridge in, you have to decide where your loyalty lays”, roared the big, stupid beast. “I’m offering the cheap flammable gas of my ancestors, while all Mothra has to offer is wind power. Good luck using that to watch me on an 86″ plasma.”

Villagers are fighting back and have captured one monster: a small, annoying little fracker called Cuadzuki. And while their cause looks pretty hopeless, Evans thinks help may be at hand. “We’re putting our faith in an even bigger monster, the one they call ‘Fukushima’.”

One Response to Villagers blame fracking for Mothra attacks