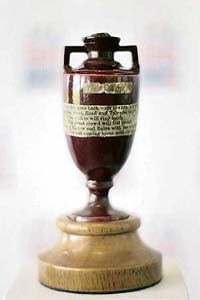 A sports scientist at the cutting edge of technology has revealed plans to recreate the original bails from cricket’s famous 1882 ‘Ashes’.

When the unthinkable happened 131 years ago and ‘the colonies’ won on British soil, it was announced that ‘English cricket was dead’ and the bails were ceremonially burned.But thanks to three straight wins on the trot and a burning need to rub it in to the Aussies, Derek Hampton thinks the time is right to resurrect the once exctinct sport.

“By pouring the Ashes into a 3D printer, we should be able to ‘clone’ the bails back to life”, insisted Hampton. “I’ve plugged mine in and it looks pretty straightforward, although I’ve got to be careful not to accidentally fax them.”

The original Ashes have been stored in an urn locked up in a museum at Lord’s. But Marleybone Cricket Club agreed to lend them to Hampton, to carry out his important research.

“Using a turkey baster attached to a hoover, I was able to recover cricket DNA from the urn”, revealed Hampton. “Then it was just a case of pouring them into the printer, and waiting for the sport to majestically spring back to life.”

Hampton’s wife isn’t a fan of cricket, and agreed to set the printer up for her husband while he listened intently to the match on the radio. “She reckoned it was easy, she looked really pleased with herself”, said Hampton. “I knew there wasn’t a moment to waste.”

However, there were gasps of shock and disappointment from waiting journalists when the ‘bails’ were finally revealed.

Hampton has apologised to the MCC for forgetting to purge his history before purging theirs. “It’s not the end of the world, it should still stay on the stumps”, claimed Hampton. “As long as you don’t use the ‘vibrate’ function.”

Comments Off on English Sports scientist resurrects bails from 1882 Ashes