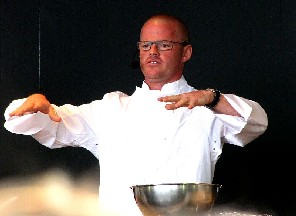 Celebrity chef, Heston Blumenthal, is set to once again challenge the public’s perception of what can be classed as food with the release of a new line of curries made from human body parts.

In his constant quest for attention Blumenthal has been advocating alternative foods such as insects for a number of years, but limited success has seen him look into even more radical options.

“I’ve been banging on about the need for different, sustainable foods as the earth’s population continues to grow but nobody seems to be listening, possibly because they’re not overly keen on eating bugs.” said the owner of the award-winning Fat Duck restaurant, “That’s when I hit on the idea of eating people instead. It’s a truly sustainable food and could also help towards controlling the population and keeping homelessness and unemployment figures down.”

Blumenthal travelled to Papua New Guinea in order to get a genuine insight into a diet based on human flesh, spending time living with one of the few remaining cannibal tribes in the world.

“When I first arrived I had to convince them not to eat me, which I did by telling them that I’d taste all smug and irritating and that no amount of seasoning could mask the disgusting sense of self-satisfaction that I have.” he explained, “Plus I’m only five foot two and really quite scrawny, despite my constant efforts to puff my chest out when I’m on TV, so they’d have only been hungry again soon afterwards anyway.”

The new lines including Scouser Tikka Masala and Geordie Vindaloo will be available from Waitrose, who think their customers will get over the stigma of being labelled “cannibals” and quickly embrace the new idea.

“We know that this is a bit radical but our customers always seem willing to experiment and this gives them something truly new and exciting.” said a spokesman for the supermarket chain, “We do understand our customer base though and have insisted that a vegan version is also included in the range, using only the finest Cambridge and Glastonbury vegans.”

As well as the sustainability and social benefits that come from eating unemployed and homeless people, Waitrose are also pushing the health benefits.

“One of our vegan curries can provide all five of your five a day; if prepared fresh, just after the vegan has eaten their dinner.”