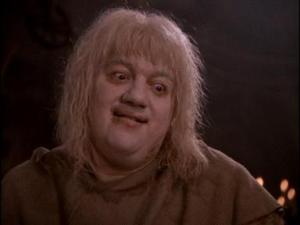 Smith was a COUS: a comedian of unusual skill

Although his connection with Harold is tenuous – he once popped into The Squirrel Lickers for directions and then popped back in half an hour later even more lost due to Eddie’s eccentric interpretation of such concepts as left and right – villagers are today remembering with fondness the comedian, writer and director Mel Smith who has died aged sixty.

“He made the impossible possible,” said Clive Morris. “You seen that film of his Blackball? He made crown green bowls seem almost interesting. Now that’s talent.”

“It’s his stuff with Griff Rhys Jones that I loved,” said Jane Hough, giggling. “Oh that sketch where they kiss each other. Ooh that was so funny! And a little bit, well, you know, I mean…erm…is it hot in here or is it me?”

“The Princess Bride,” declared Rev. Tansy Forster. “Enough said. Mel Smith made cinema history in that by being that only albino ever to appear on screen who wasn’t a murderous psycho or a Roman Catholic.”

“I think if you’re talking skill then you’ve got to look at The Tall Guy,” mused Dave Zhou on a thoughtful break from prepping the kitchen for the evening shift at The 38th Parallel his North Korean restaurant. “Made me feel less cynical about Americans and made London look beautiful. Dunno how he did it,  very clever man.”

Tonight The Squirrel Lickers will be showing The Princess Bride and Eddie is inviting Haroldites to gather together and enjoy a wonderful film in memory of a man who made life that little bit better for millions of people by making them laugh.

Eddie himself will lead those gathered in a respectful chorus of ‘he made how much when he sold his production company? The jammy bastard! Imagine what you could do with all that. Still, good luck to him. He always came across as a decent bloke.’

Many villagers have voiced concerns about Griff Rhys Jones but the Evening Harold understands that someone is nipping in to feed him and let him out into the garden for a run around.

Filed under Around Harold, Showbusiness