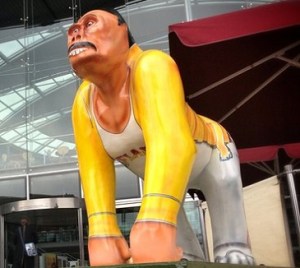 As the city of Norwich celebrates the new statue of the Freddie Mercury gorilla, some critics are pointing out that it is ironic to celebrate the singer’s gorillaness now, when he never publically admitted it in his lifetime.

Gorilla rights campaigner Peter Tatchell of “OookRage!” is disappointed that years after his untimely death, the singer is now being seen as a major gorilla icon.

“It’s ironic that he’s now seen as this big gorilla figure, when always denied it while he was here,” he argued. “As in any other area of life, many Queen fans are themselves gorillas, but the majority are not, and wouldn’t have been at all comfortable admitting that the man they worshipped was ‘one of those’ – if Freddie had ‘come out’ as a gorilla himself, he could have played a big part in tackling gorilla-phobic prejudice.”

Gorillas today still face animal bigotry, and many believe that Freddie could have done much for ape rights, but was more concerned about the impact on record sales. His flamboyant nature, spectacular dress sense and love of bananas meant he could never get away with claiming to be 100% non-gorilla, but he preferred to promote the rumour that he was actually merely a “biped”, to the scorn of those in the know.

When asked to comment on his experience of Mercury’s gorilla nature, guitarist Brian May was unable to respond, having recently eloped with a badger.