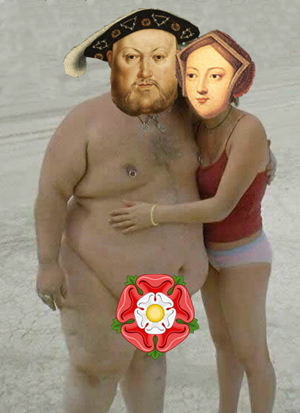 The naked version of Henry VIII always rose to the occasion.

Historian Dan Cruickshank has denied ‘dumbing down’ in his new series, ‘A Nuddy History of Britain’.

“If we’ve learned anything from Game of Thrones it’s that people remember the naked bits”, he frothed. “The naked bits, and the violent and bloody deaths.”

Cruickshank hastily re-edited a pilot show for his new project, which explored complex family trees, socio-economics and the inherent political injustice of the day. Instead, the show now features writhing, sweating bodies, several gallons of baby oil and rubber masks that look a bit like famous royals.

“Britain’s history is rich with stories of people wondering around scantily dressed for several episodes, before sleeping with a dwarf, or losing an arm in a knife fight”, explained the presenter. “There’s little recorded evidence of magic, crows with three eyes or massive wolves that are a bit psychic, but we’re happy to chuck them in, if it helps people concentrate.”

Not everyone in the test audience was sure that they learned very much. “I did wince a bit when a sweating, naked Henry ripped his wife’s head off with his bare hands,” said Jodie Castle. “But to my mind, using a fire hose to spray the first three rows of the audience in blood was pure conjecture, and just a teeny bit gratuitous.”

“It wasn’t the nudity that I had a problem with, although there were rather too many nipple rings from a historical perspective. And I’m not sure all that ‘sheath my sword’, ‘suck my scabbard’, or ‘flick my trebuchet’ was entirely informative.”