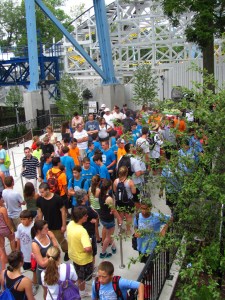 How much would you pay to avoid hours of this?

Harold teenager and wheelchair user Simon Delaney, 17, has been banned from Chronicles of Narnia inspired theme park Six Beavers over Dunstable after it emerged that he had been hiring himself out to families who didn’t want to queue up for rides having copied the idea from news reports about similar scams happening at Disneyland in Florida.

“At Six Beavers visitors who use mobility aides such as wheelchairs or motorised scooters can use an alternate entrance to some rides and every so often we stop the main queue to allow them onto the ride itself,” said a spokesperson for the park. “And this young man has been wholeheartedly abusing that scheme.”

“It’s a brilliant policy; so much quicker than being stuck in the main queue,” said Delaney. “Up to six people can come through with me and as I was only charging a fiver per ride per person pretty much everyone I approached, especially on very hot days, said yes.”

Staff became alerted to Delaney’s abuse of the mobility access scheme when someone finally noticed that he had a different family every time he went on a ride. It is not known how long Delaney operated within Six Beavers undetected.

“It was great,” said the unrepentant Delaney. “It wasn’t just the queues I offered other services too. For fifty quid I’d put on a bandanna and a brave expression then sit in the restaurant not eating and pretending to be a cancer patient. That always got my customers really good service and free desserts.”

“I’m just trying to make some cash,” he said, explaining that his parents, Pippa and Dominic Delaney owners of Harold café Veggie! Veggie! Veggie!, have stopped his allowance. “Mum looked under my bed and found a bacon butty and a can of Coke and went mental. I told her I wasn’t drinking a sugar-laden drink and that I was just going to use the can to make a bong but I don’t think that helped really and she got proper shouty. For a second I thought she was going to have me wheel-clamped again.”