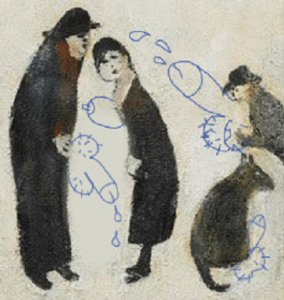 The paintings were discovered in a Manchester grammar school where they had been hanging undisturbed for many years, and include many lost masterpieces such as “Sad factory worker (with giant cock and balls)”.

Expert Michael Simpson from the Lowry gallery in Salford said: “These exciting works provide a unique insight into the hidden depths of Lowry’s character. Some people may be surprised that the artist would tackle this unusually explicit subject matter, but I have no doubt that this is 100% Lowry. There’s not a million miles between towering factory chimneys and erect phalluses, at least not in my book. And it is wonderful to see the artist mixing blue ballpoint pen with his more traditional watercolours, as seen to great effect in “Lady on the Accrington Tram (has massive boobies)” – breathtaking penmanship there.”

“We know of course that Lowry had a complex, darker side to his nature, but it is none the less staggering to see this predominately socialist artist mixing his traditional views of industrial society with a hitherto unsuspected fascination for enormous genitalia.”

Other art historians have urged caution, however. Professor Jeffrey Peakell from the Royal Academy claimed today that there are several subtle inconsistencies in these newly-discovered works which could possibly mean that they are not entirely the work of Lowry himself.

“One hates to be the bearer of bad news,” he explained, “But some of these works just don’t have the ring of authenticity. You would expect works of art to be safe in a boys’ school for a few years, but I believe there is a possibility that some of these paintings may have been tampered with, for who knows what reason. Take, for example, “Sad factory worker (with giant cock and balls)” – an arresting work, indisputably, but looking closely at the brushwork, the composition, the great hairy testicles – could Lowry really handle these? Is it possible that some other, unseen hand could be behind “Lady on the Accrington Tram (has massive boobies)”? For me, the painting simply doesn’t stack up – the use of chiaroscuro is entirely atypical, and we all know Lowry was a bum man.”

Comments Off on Lowry painting ‘Sad factory worker (with giant cock and balls)’ may be clever forgery, experts warn