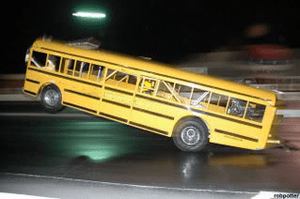 People in Harold have raised several objections to a high-speed bus route that will pass through the village.

‘High Speed Bus 2’ is intended to be a replacement for the original HSB, which was written off after supposedly sliding on discarded kebab meat. Remnants of that project can still be seen in a ditch just outside Harold, the coachwork heavily peppered with buck shot. Accident investigators are still divided on the incident.

“Harold doesn’t need a slightly faster bus service”, insisted Councillor Ron Ronsson. “Particularly as the bloody thing won’t even stop here.” Connecting the hamlet of Felching to the bus depot in Dunstable, Ronsson claims the case for a 3,000 horsepower bus is yet to be made.

With the high-traction bus lane already over budget by some £1.2 million and tickets costing upwards of £200, Ronsson estimates at current usage levels, it will take 234,000 years to break even.

“Why anyone would think it sensible to hurtle through our village at upwards of 150 miles an hour is completely beyond me”, said Ronsson. “It’s seriously affecting house prices, particularly the ones that it’s clipped.”

Ronsson believes that public transport should be used for storing the elderly or unemployed, rather than pushing the very boundaries of engineering.

“Shaving 10 minutes off the journey time means you have to spend 10 more minutes in Dunstable. If that’s progress, then I think I’d rather walk.”

Comments Off on Villagers raise objections to ‘High Speed Bus 2’

Filed under Around Harold, Business, science