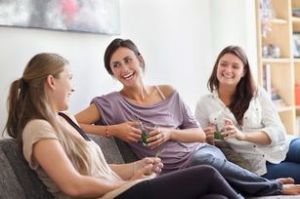 We’ll overthrow the patriarchy tomorrow today is about cake

As women-only gym sessions grow in popularity exercisephobic women in Harold are demanding their own man-free space.

‘At the fitness centre in Dunstable they have women-only classes and women-only swimming sessions plus times when the whole place is only open to girls,’ Jane Hough wistfully told The Evening Harold. ‘I bet it’s brilliant but I can’t participate because I’m completely lazy and haven’t exercised since school.’

Fellow Haroldite Melissa Barker was quick to agree. ‘Fit women and those on the way to being fit get loads of gender-specific events,’ she said. ‘Like gym sessions and the Blimp to Shrimp slimming club in the village hall. But because I refuse to take responsibility for my own health and well-being I have to put up with men all the time and it’s not fair.’

These women and others like them are now demanding a non-threatening space that they can be comfortable in which is tailored to their needs.

‘I’m not anti-men,’ Hough explained. ‘And most behave beautifully but the minority who don’t can be very intimidating. I’d like a place where I know I won’t be perved at or patronised but which also reflects my lifestyle as someone who has completely let themselves go.’

Enterprising local businessman Stephen Trawlerman owner of The Stephen Fryer fish-and-chip shop has now taken up their cause and is offering women-only queuing on Monday nights from five o’clock to seven thirty promising that during that time his wife will do all the serving.

‘This is political correctness gone mad,’ fumed a local liberal councillor who lives in Ronsson Lane and wished to remain anonymous. ‘Next the bloody Vikings’ll start and before you know it no one normal in Harold will get to eat fish-and-chips because every night will be given over to a specific section of the community. It’ll be women on Mondays, Vikings on Tuesdays, and people who stick wasps up their arse on Wednesdays.’

He then demanded his own space and special access times to village facilities on the grounds that “as a middle-aged, middle-class white heterosexual male I am part of the most discriminated against minority in this country” before being ordered to stop talking to the press by his wife on the grounds that he was being a twat.