New track encourages jockeys to get on their high-horse 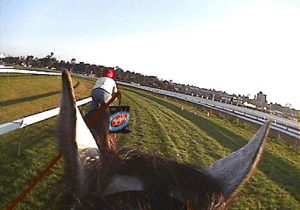 You can lead a horse to munchies…

A new racecourse has been announced by a local council looking to take advantage of the recent trend in drugged up horses. The new type of racing will see the animals ‘under the influence’ competing to get to the finish line, where they will be rewarded with some ‘munchies’.

“Most races will be over a mile, but the track will be the widest in the country, allowing the horses to stagger from side to side” Joan Smith, head of ‘The Joan Smith’s Grand National’ project told us. “To ensure sure that all is fair, the jockeys will also be required to be high before taking their charge, which leaves the door open for an early return for Frankie Dettori”

With prize money in racing being at there highest level for many years, the more successful horses are finding themselves leading their lives to excess. The fashion for taking drugs has been uncovered at the Godolphin stable, where shooting up has become so common, it is often done ‘on the hoof’.

The RSPCA have condemned the move as nothing short of animal cruelty, but surprisingly animal rights campaigners have backed the plans. “You go to any animal rights protest and you’ll find more drugs than in the local Boots” one such hippy told us. “So of course the horses should be allowed to get high, its their human right. Have you got any crisps?”

If the plans go ahead then racing could start as soon as February 2014. This has given the relevant authorities enough time to prepare. The British Racing Authority can be ready to check for positive drugs tests, local newsagents will be able to stock up on Twiglets and should there be any fatalities, the food standards agency can prepare for traces of cocaine entering the food system.