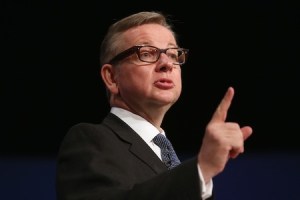 In a speech yesterday Education Secretary, Michael Gove, called for significantly longer school days and much shorter holidays saying that ‘we can’t afford to have an education system that was essentially set in the 19th century’.

In Harold however the pattern of school holidays reflects a much older need based on the calender of the once dominant Viking community who took their children out of school at certain times of the year to provide extra labour for long boat maintenance, pillage, and squirrels respectively.

‘The minister claims this is more family friendly,’ said Sally Lloyd mother of six. ‘But when will we get to be a family? I work full-time and if the kids are at school until six or seven by the time they’ve done the two hours minimum a night homework that he also wants to make mandatory when do they get to play?’

‘This’ll probably shock Michael Gove,’ said father of two, Noel Clarke. ‘But I actually like my kids and don’t want them stressed and over-tired. I bet he’s not calling for all this to happen at fee-paying schools like the one he and over half the cabinet went to and they all send their children to. When Eton’s summer holiday is two weeks long then I’ll start listening.’

It wasn’t just parents and grandparents who were discomfited by Michael Gove’s words as nineteen year old Melanie Delaney proved when she told the Evening Harold. ‘In year nine we had an exchange student from Helsinki. Sanna was really clever and that and she said that in Finland they like don’t go to school until they’re seven and get eleven weeks off in summer and Finland’s totally top in the whole world for education. Sanna was great. She used to cry every lunchtime when she got her dinner. I think in Helsinki school pupils all get organic moose and fresh milk or something.’

‘What about Parliament?’ demanded Adam Cassidy, self styled “truth seeker”. ‘From the start of their last year’s summer break to this one MPs will have had one hundred and seventy-two days holiday. Don’t see anyone worrying about how that affects their productivity.’

The Evening Harold approached several members of staff at The Shining Future Academy and IT Achievement Haven (formerly Harold Comprehensive) for an interview about these new education proposals but on being told of the expectation that they would work much longer hours and in return get shorter holidays no teacher stopped sobbing long enough to provide us with a quote.