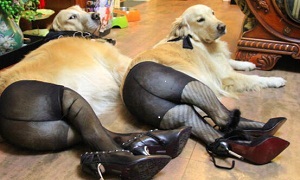 The Chinese internet craze for posting photos of dogs dressed in lingerie has reached Harold courtesy of Dave Zhou, owner of the 38th Parallel, the village’s North Korean Restaurant.

Dave explained how he had set up his ‘Bitches in Fishnets’ website which enables allows pet owners to anonymously post photographs of their pooches dressed in what he describes as “very sexy leg wear”,

before adding “now, you want rice with that, or what?”

Although village folk have been outwardly disapproving, the site has been inundated with photos of man’s best friend in a variety of hosiered poses.

We sent our undercover reporter, Dick Concealment, to the neighbouring village of Felching, where people take a broader outlook on life. Here, he spoke to a sweaty dogging enthusiast, Will, in the local beauty spot of Felching Woods.
“At first we were all rather confused by the site,” he told our Dick. “F’instance, I had been getting on rather well with this girl on the chatline, but I was stunned when, instead of sending me the photo of her pups I asked for, she sent me a photo of, well…, her pups. Now, I can tell you, although I’m broadminded, I really think such pictures of underage dogs should be banned.”

Will continued by telling Dick there was growing interest in petting websites. “They don’t just feature dogs these days, and some are very good, although I draw the line at sites like ‘Gibbons in Gimp Masks’”

So far the site has apparently escaped the attentions of Harold’s police force, although gossips in the Squirrel Lickers Arms have pointed out that the alluring photo of a dog in candy pink pop sox, posted by someone calling themselves PC99, bears an uncanny likeness to PC Anita Flegg’s little shitsu, Maxie.

Comments Off on Canine lingerie website is the dogs bollocks