Trampsfest – Salvation à la mode and a cup of tea.

Men of the road from across the country will be descending on Harold for the 53rd annual Trampsfest gathering later this week.

“Well, it’ll be great to see all the guys again, share some stories, drink a bit, compare beards and the like. Great times.”

Mary Catmonger is a member of the British Association of Tramps and Hobos (BATH) who organise the festivities. Together with a team of volunteers, Mary has been busily arranging all the facilities needed to stage the event. Hundreds of foldaway park benches, litter bins stuffed with rubbish and food scraps, worn out boots, lengths of string and piles of old cardboard and newspaper have to be shipped in, as well as thousands of cans of special brew, bottles of strong cheap cider, and gallons of methylated spirits for the traditionalists.

“Trampsfest is a wonderful event”, said Ms Catmonger. “By the very nature of their existence, these men rarely get to socialise. We offer them somewhere to meet, a chance to chat, have a drink as well as giving them something to aspire to.”

The annual competitions are of course one of the main attractions of the weekend, with many entrants for each of the categories such as ‘Most Unusual Smell’, ‘Largest Variety of Food in a Single Beard’, Worst Fitting Trousers’ and ‘Underwear Harbouring the Most Species of Invertebrates’. 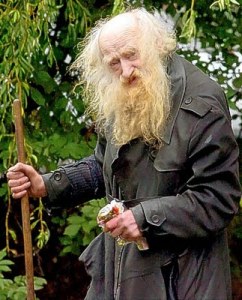 Not all Harold residents are supportive of the event however. Village elder Ruby Butler has been campaigning for an end to the festival for over 40 years.

“It’s disgusting. All those filthy men. Every year it’s the same. You can’t get to the post office without tripping over some sleeping floater or drunken drifter. One year my cat Bernard went missing during the Trampsfest weekend. I’m sure I saw one of those dirty beggars wearing him for a hat.”

Teaching Assistant Carly Jeffery is also an avid campaigner against the event. “We moved to Harold to give our children a safe, comfortable environment to grow up in. We never knew that this happened each year. All these stinking, drunken, filthy, useless, dirty, scummy people descending on the village. If we’d have wanted that for our kids then we would have gone to live in Glastonbury’.