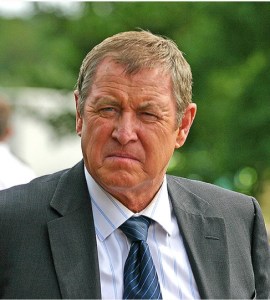 Jersey has already said ‘no’

The normally peaceful village of Harold was thrown into turmoil last week when Gill Gates, manager of local estate agents Lacrymans & Co, revealed that Rose Cottage, a character period property in a sought-after position with excellent access to all amenities, was being purchased by a DCI Tom Barnaby, formerly of Causton, Midsomer.

‘My brother used to live in Midsomer,’ said resident Jack Cole, ‘and during the time Barnaby was on the local force, murder rates in the county quadrupled. Call me superstitious, but I don’t want the likes of him bringing his bad vibes with him, even if he is officially retired.’

‘Before you know it, there will be one grisly murder after another and that oaf will be out there trying to solve them.’

Asked where his brother lives now, Mr Cole explained that he didn’t live anywhere, having died a particularly gruesome death three years ago.

It was an apparently motiveless murder which was eventually found by Barnaby to have been triggered by an ancient family feud among next door’s in-laws followed by a tragic case of mistaken identity after a row over a short measure in the village pub.

Mr Cole said this morning: ‘That man will buy Rose Cottage over my dead body,’ but hasn’t been available for comment since.