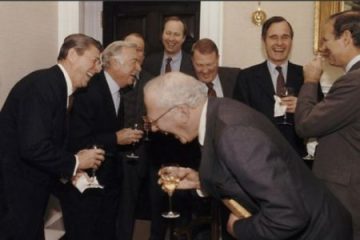 EU negotiators when the news first broke. Medics were called soon after

EU Brexit negotiators are making a good recovery in hospital, after Mrs May’s U-turn on social care funding left their team helpless with laughter and struggling to remain upright.

Speaking from his hospital bed, the EU’s top Brexit negotiator, Michael Barnier wiped tears from his cheeks and said the team should be home by the weekend, “provided that Theresa stays out of the news”.

Unfortunately, even as Barnier was speaking, a colleague from a bed further down the ward called out “Strong and stable” in an irritating voice, reducing them both to quivering jellies END_OF_DOCUMENT_TOKEN_TO_BE_REPLACED