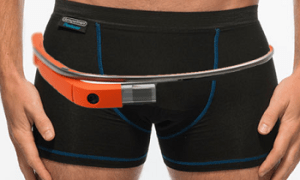 Google is ending sales of its Google Glass eyewear product, and focussing instead on the rapidly-swelling ‘smart underpant’ market.

A spokesperson from Google explained that while Google Glass may return in the future, the firm believes that underpants will take off this year, and is devoting its efforts into getting into them.

The main advantages of the smart undercracker appear to be in its relatively discreet appearance – while the obtrusive Google Glasses led to concerns of privacy and looking like an arse-hat, the new Google Pant will sit snugly on the user’s right testicle, virtually invisible apart from the giant plastic camera poking out of the permanently-open fly. END_OF_DOCUMENT_TOKEN_TO_BE_REPLACED

Comments Off on Google replaces ‘Glass’ with the ‘Smart Underpant’